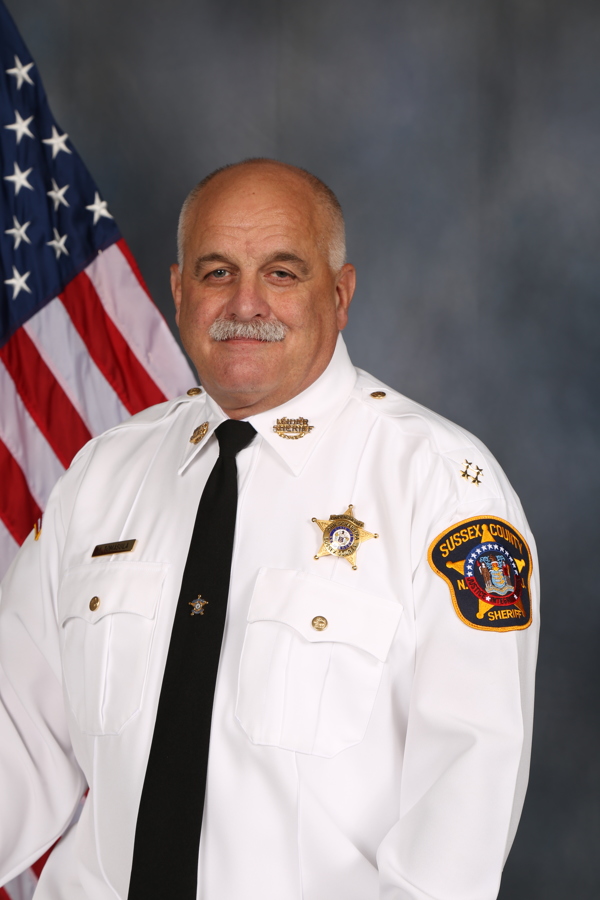 Undersheriff John Tomasula is a lifelong resident of Sussex County, raised in Newton and currently residing in Hampton Township.  His interest in public service developed after joining and serving for a number of years with the Newton Volunteer First Aid and Rescue Squad.  That role led to an opportunity to serve as a police dispatcher with the Newton Police Department and the eventual appointment as a police officer in 1985.

In his first few years with the department, Undersheriff Tomasula served as a foot patrolman assigned to the Spring Street business area, gaining valuable insight to concepts relating to Community Policing and promoting the various community initiatives taken on by the Department.  He carried out patrol related responsibilities until his assignment to the Detective Bureau in 1988.

His role in the Detective Bureau brought opportunities for additional specialized training, which included Narcotics Investigation, Advanced Interrogation & Interview Techniques, Motor Vehicle Theft Investigation, Advanced Criminal Investigation, Crime Scene Investigation and Methods of Instruction.  While assigned to the bureau Undersheriff Tomasula instituted the Department’s bicycle patrol program in furthering the Community Policing Initiatives.  The Undersheriff served in the bureau until his promotion to Sergeant and assignment to patrol in 1994.  As a patrol Sergeant, the Undersheriff received additional training in First Line Supervision and other areas relating to patrol operations.

In August 1995, Undersheriff Tomasula was promoted to the rank of Captain in a reorganization to the structure of the Department.  He was assigned the responsibilities of Patrol Operations, Internal Affairs, and the 9-1-1 Communications Center.  His duties afforded opportunities for additional training and certifications involving Internal Affairs, Policy Development, 9-1-1 Communications, Emergency Medical Dispatch and Response to School Shootings Instructor.  He is also a graduate from the West Point Command & Leadership Program.

In August 2000, Undersheriff Tomasula was promoted to Chief of Police for the Town of Newton, serving in that role for 10 years.  During that tenure the Department continued to practice and refine its Community Policing efforts.  The Department was also restructured to promote the professional development of its police and 9-1-1 Communications staff.  Undersheriff Tomasula played a critical role in the concept, planning and construction of a new police facility and 9-1-1 communications center.  He also attended and graduated from the FBI National Academy.  In his tenure, the Undersheriff was recognized as police officer of the year by the Knights of Columbus Council 7784, received the Service Award from the Sparta Chapter of Unico, and the Service Award from the PBA Local #138 for his tenure as the Executive Board Secretary.  He also served as Executive Board Secretary and Vice-President of the Sussex County Police Chief’s Association.

In December 2014, Undersheriff Tomasula was given the opportunity to join the Sussex County Sheriff’s Office as Director of Communications as the Sheriff prepared to launch the new Sheriff’s Communications Center operations, which included the addition of providing 9-1-1 communications and emergency medical dispatch services to local municipalities.  In the few years beyond the successful launch of 9-1-1 communications services, the center enjoys an excellent professional reputation in its service to the communities.

In March 2018, then 9-1-1 Director Tomasula was promoted to Undersheriff, and given the responsibility of the day to day operations of the County Correctional Facility.