Morris County: Kelley Zienowicz Sworn In As Chief Of The Morris County Sheriff’s Office on September 3, 2019

Morris County: Kelley Zienowicz Sworn In As Chief Of The Morris County Sheriff’s Office on September 3, 2019 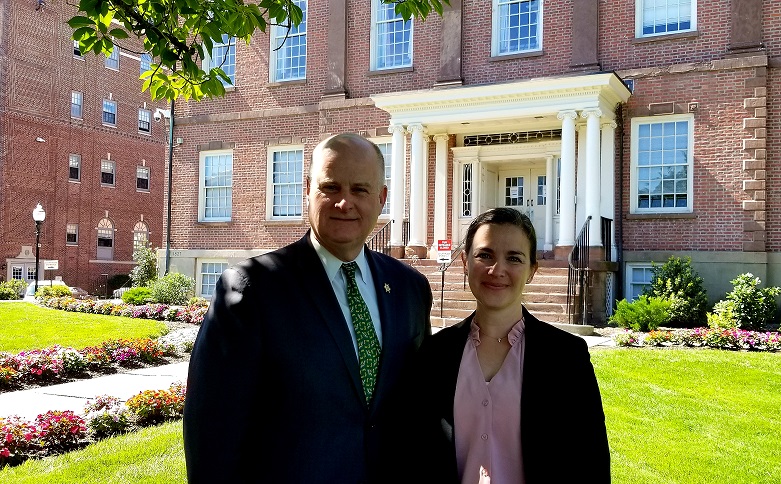 Morris County Sheriff James M. Gannon has selected Kelley Zienowicz as the person to lead the Sheriff’s Office into the future.

Kelley Zienowicz, a graduate of the elite FBI National Academy, was  promoted to the rank of Chief Morris County Sheriff’s Officer, the highest-level Officer position in the Sheriff’s Office Bureau of Law Enforcement, on Sept. 3, 2019.

Chief Zienowicz is now the highest-ranking woman in the Morris County Sheriff’s Office and the sole female chief in Morris County.

“Chief Zienowicz has a temperament that motivates and energizes others. She is highly-educated, a graduate of the elite FBI National Academy, and a true leader with an impeccable work ethic.”

“With Chief Zienowicz at the helm of day-to-day operations overseeing all divisions in the Sheriff’s Office Bureau of Law Enforcement, we will accomplish great things which the people of Morris County deserve,” Sheriff Gannon said.

“Not only am I proud to have the backing of the Sheriff, I know this is an important time for the agency as a whole. I hope to bring positive  motivation to the agency, from the top to the bottom,” Chief Zienowicz said.

As Chief, she will be responsible for management and day-to-day oversight over the Bureau of Law Enforcement’s four divisions: Support Services, Protective Services, Legal Services, and Special Services, which includes the Crime Lab and Crime Scene Investigation Unit.

Chief Zienowicz – who has received multiple awards, including the New Jersey Women in Law Enforcement Breaking the Glass Ceiling Award – will be promoted to Chief from her previous rank of Detective Lieutenant.

She began her career with the Morris County Sheriff’s Office in 1999 as a civilian clerk-typist assigned to the Internal Affairs Section.  Within a year, she was hired as a Sheriff’s Investigator and in 2001, she attended and completed training at the Morris County Police Academy.

Chief Zienowicz was first assigned to the Protective Services Division, which provides security and judicial protection at the courthouse complex.

In August 2001, she was assigned to the Criminal Investigation Section – now called Crime Scene Investigation (CSI) – and spent 11 years in the Unit, assisting in multiple criminal investigations throughout Morris County.

She was called as a witness for the prosecution in several high-profile criminal cases in Superior Court between 2003 and 2014. She was qualified as an expert fingerprint witness in the sexual assault trial and retrial of Andrew Pena, and testified about evidence in the murder trials of Jose Feliciano, convicted of murdering the Rev. Edward Hinds in Chatham in 2009; Anthony Novellino, convicted of killing his former wife, Judith, in Denville; and Carlos Rojas, found guilty of bludgeoning Esteban Hernandez Vazquez and leaving his body in the trunk of a car abandoned in Lincoln Park.

Chief Zienowicz was promoted to the rank of Sergeant in April 2012 and assigned to the Legal Services Division as the Executions and Foreclosure Section Supervisor. That promotion was followed on March 1, 2016, by another advancement to the rank of Detective Lieutenant.

She was assigned the post of Division Commander in the Administrative Division, overseeing Internal Affairs and the Special Operations Section. She then was transferred to the Protective Services Division in September 2016, where she oversaw the courthouse complex and operations and security at the Dover Probation Office.

The FBI National Academy is a professional course of study for U.S. and international law enforcement managers who are nominated by their agency heads because of their demonstrated leadership abilities. The program provides coursework on intelligence theory, terrorism, terrorist mindsets, management science, law, behavioral science, communication and forensic science to improve the administration of justice in police departments and agencies.

Upon returning from the FBI National Academy, Chief Zienowicz in September 2018 was transferred to the Special Services Division, overseeing CSI, Evidence Section, and the Bomb Unit.

Assisting in the implementation of new technologies at the Sheriff’s Office, Chief Zienowicz was a member of the Evidence Unit start-up team for the BEAST evidence tracking system, guided implementation of the CivilServe civil process database system in the Executions and Foreclosure Unit, and coordinated use of the new Computer Aided Dispatch System within the Protective Services Division.

Chief Zienowicz has logged a voluminous number of hours on training, including intensive courses on crash reconstruction, supervision of police personnel, shooting analysis and reconstruction, and interpretation of bloodstain patterns.

For a downloadable copy of this article, click here: News Release –  Kelley Zienowicz sworn in as Chief of Morris County Sheriff’s Office on September 3, 2019