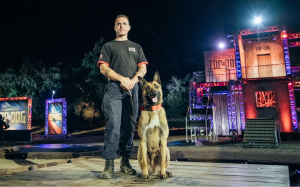 When he was a child, Morris County Sheriff’s Office Detective Corporal Michael McMahon’s mother set down a firm rule: If he wanted a dog, he had to train it.

By second grade, he had his first dog enrolled in obedience school. As he grew up in Long Valley, he went on to train all other household canines, those owned by other family members, and then pets owned by neighbors.

A few decades later, Detective Corporal McMahon has not only amassed dozens of trophies earned in the competitive dog sport arena but is a contestant on the popular A&E Network’s ultimate K-9 competition series, “America’s Top Dog,” brought to the screen by MGM’s Big Fish Entertainment.

A dog handler and trainer for the Sheriff’s Office K-9 Section, Detective Corporal McMahon and his K-9 partner, a Belgian Malinois named Kaiser, or Kai for short, will debut their speed, dexterity and scent-detection skills on the 8th episode of “America’s Top Dog.”

The show, a spin-off of A&E’s “Live PD,” will air Wednesday, February 26, at 9 p.m. At the episode’s end, viewers will know whether Team Kai — #teamkai – will be in the finale in mid-March for the title of America’s Top Dog.  Team Kai’s episode is dubbed “The Battle of the Garden State.”

Show highlights so far, have included the spunky performance on Episode 4 of a civilian, 31-pound Shorty Bull named Minion, who knocked down a 130-pound wall, dashed through duct work and up a staircase of boxes before nabbing in the groin a “perpetrator,” who thankfully was wearing a bite-suit.

Team Kai is one of 50 K-9 teams – both civilian and law enforcement-related – battling for the title and the $25,000 grand prize.  Detective Corporal McMahon’s presence on the show wasn’t even originally his idea.

He had an informal chat at a Protection Sports Association competition with a series casting agent. Then, his wife Michelle, a master dog trainer and handler herself, submitted an application on his behalf in the spring of 2019. He quickly received a call, was interviewed, and invited to be on the show. In June of 2019, Detective Corporal McMahon and his family, including Kai, boarded a flight for Santa Clarita, California, where the series was filmed.

“We were excited. It wasn’t expected because I was asked at the end of casting. Maybe my background set me apart a little bit from other competitors because I raised Kai since he was a puppy,” Detective Corporal McMahon said. (Kai was three during filming and has since had a birthday.)

Until the series is complete, Detective Corporal McMahon said, he can’t divulge all the challenges of the competition and its strenuous obstacle course that required him to be as fit as his dog. But he heaped praise on Kai, who is the son of his first patrol dog, Ronan.

“We have a really good bond. I think he has the nicest temperament of any working dog I’ve ever worked with. He has the ability, like a light switch they say, to turn it on and turn it off. He has the most distinct switch of any dog I’ve ever worked with. When he knows it’s time to work he’s ready to go. When he knows it’s time to relax with family, he’s able to do that as well,” Detective Corporal McMahon said. 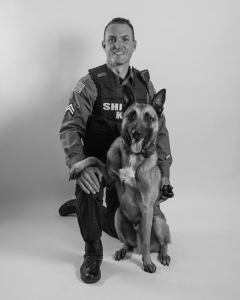 “Detective Corporal Michael McMahon’s calm temperament and talents as a K-9 handler are some of the greatest assets of this Agency. By being chosen to compete on the show, he has showcased the fine and often astounding work performed by law enforcement Officers and their K-9 partners,” Morris County Sheriff James M. Gannon said.

Detective Corporal McMahon grew up in Long Valley and graduated from Bayley Ellard High School in 2004. He met his future wife while they both worked at the Morris Animal Inn in Morristown. He attended County College of Morris and in 2008, both he and his wife enrolled in the Tom Rose School for Professional Dog Trainers in St. Louis, Missouri.

“He was at the top of his class and demonstrated great promise. I wish I had more students like him,” said school Owner Tom Rose. He said that Detective Corporal McMahon graduated the Professional Dog Trainer and Master Trainer programs.

He and his wife ran a dog training and breeding program in St. Louis, and Detective Corporal McMahon also established a connection with the Morris County Sheriff’s Office by selling and placing dogs with their K-9 Section. The relationship led to a job offer, and he returned to New Jersey and joined the Agency in 2011. After graduating the Morris County Police Academy, he immediately was assigned to the K-9 Section.

Kai, whose favorite reward is the Frisbee, is a prized member of the McMahon family, along with their other four dogs: a Pit Bull/Chihuahua mix, a Border Collie/Jack Russell mix, and two Belgian Malinois dogs that are retired from the Sheriff’s Office. He reiterated his special connection to Kai.

“The show is truly a competition of not just the dog’s skills but the two of you as a team, proving your bond and your ability to work together,” he said.

Ocean County: Tips For Protecting Yourself From COVID-19 (Video)
Scroll to top