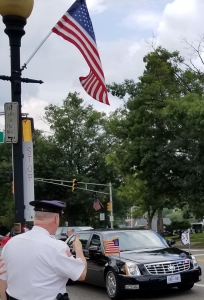 The Morris County Sheriff’s Office has been awarded a reimbursement of $55,938.90 in federal funds to cover overtime costs they encumbered, in 2018, while protecting President Donald J. Trump during his visits to New Jersey. The Morris County Sheriff’s Office played an integral role in the protection of the President for the duration of his periodic visits to the State of New Jersey. In particular, President Trump frequently travelled in and out of the Morristown Municipal Airport. The Morris County Sheriff’s Emergency Response Team (SERT), K9 Section (explosive Detection Dogs), Motor Unit, Bomb Squad, and Special Operation Group (SOG, a tactical medical component) all worked under the direction of the United States Secret Service (USSS), Newark Division, during these Presidential Protection Details.

On seventeen (17) occasions in 2018, the United States Secret Service specifically requested the assistance of the Morris County Sheriff’s Office, as well as several other local police agencies, on protection details as President Trump visited his New Jersey residence. When these details occurred during normal business hours, the Sheriff’s Officers were assigned at no additional cost to the Morris County Taxpayer. Where their services went into overtime hours, Morris County Sheriff James M. Gannon applied for relief through a federal grant known as the Fiscal Year 2018, Presidential Residence Protection Act (FY2018 PRPA).

Throughout 2018, the Sheriff’s Office thoroughly tracked the assignment of personnel towards this end, and in late October the office filed for the grant. With the assistance of then Congressman Leonard Lance, the Morris County Sheriff sought federal reimbursement funds for the County of Morris. A decision was expected in late December of 2018, but the shutdown of the federal government delayed that pronouncement slightly.

This week, Sheriff Gannon was notified that his application was deemed appropriate for the award of fifty-five thousand, nine-hundred thirty-seven dollars and ninety cents ($55,937. 90) in reimbursement funds to the County of Morris.