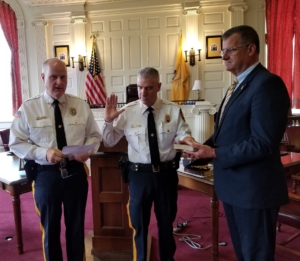 Richard A. Rose, the Chief Warrant Officer for the Morris County Sheriff’s Office since January of 2017, was promoted September 1, 2020, to a top-command position as one of two Undersheriffs in the agency’s Bureau of Law Enforcement.

Undersheriff Rose, who was responsible for the Bureau’s Administrative Division as well as audits, budgeting, reviews and operational services as Chief Warrant Officer, will maintain management of those duties as well as oversee all Morris County Court Services, including Protective Services, Legal Services, the Warrants Section and Professional Standards.

“I have known Undersheriff Rose for more than three decades as an astute, analytical and ethical professional who always has his finger on the pulse of what a community needs and expects from its law enforcement Officers. I am proud to promote him and know him to be a public servant that the residents of Morris County can always trust,” said Morris County Sheriff James M. Gannon.

Undersheriff Rose will share the same title as Bureau of Law Enforcement Undersheriff Mark Spitzer, who has held the position since February 8, 2017.  Undersheriff Spitzer now will devote most of his supervisory expertise to the Sheriff’s Office Criminal Investigations Division, Evidence Unit, and specialized Emergency Services that include the K-9 and Crime Scene Investigation (CSI) Sections, Bomb Unit and Sheriff’s Emergency Response Team (SERT).

“I’m honored that Sheriff Gannon has faith and trust in me. I know him as a motivational leader who cares as much about taking criminals off the streets as he does about our community’s vulnerable people who live on the streets and in homeless encampments. As I said in the oath I swore today, I will fulfill my duties to the best of my ability,” said Undersheriff Rose.

“I feel fortunate for the opportunity that Sheriff Gannon has afforded me to assist him in leading this office in the future,” Undersheriff Rose said.

Sheriff Gannon administered the oath of office to Undersheriff Rose in the Historic Courtroom of the Morris County Courthouse.  Agency Command Staff and friends from his career days in the Morris County Prosecutor’s Office – including current Office of Emergency Management Director Jeffrey Paul, Michael Rice and Jane Recktenwald, the current coordinator of the Morris County Sheriff’s Trends and Analysis Team (MCSTAT) – attended the ceremony.

Undersheriff Rose grew up in Woodbridge, New Jersey, and graduated from Woodbridge High School in Middlesex County in 1979. He then attended LaSalle University in Philadelphia, Pennsylvania, graduating in May 1983 with a Bachelor of Arts degree in criminal justice.

Commuting by bus from Middlesex County, he continued his higher education at John Jay College of Criminal Justice in New York City, where he earned a Master of Arts Degree in Criminal Justice in June 1985.  He worked as an Investigator for the K-Mart Corporation while earning his Master’s degree.

Undersheriff Rose was hired by the Morris County Prosecutor’s Office in December 1985.  Throughout his public service career there, he rose through the ranks of County Detective, Detective/Supervisor, Detective Sergeant, Detective Lieutenant and Executive Captain.

In the first decade of his Prosecutor’s Office career, Undersheriff Rose was assigned to and then supervised Special/Confidential Investigations, among many other duties.

While serving as a Detective Lieutenant between April 1996 and April 1999, he was the Section Supervisor of the Special Service Section, which encompassed the Fraud, Confidential Investigations, Court, Bail, Evidence, Forfeiture, Weapon Return and Pre-Trial Intervention units.

Between April 1999 and January 2002, Undersheriff Rose was assigned as the Section Supervisor of the Special Enforcement Section that covered the Narcotics/Gambling Unit, Fugitive and Intelligence Units.  His responsibilities included staffing, budgeting, operational planning, administrative organization, conflict resolution and preparation of reports and memorandums and maintaining records.

For seven months in 2002, Undersheriff Rose also served as Section Supervisor of the Special Service Section which encompassed the Court, Bail, Evidence, PTI, Grand Jury, Intake and Victim-Witness Units.  Among other tasks, he was responsible for oversight of the daily administration of the Victim-Witness Unit’s grant and expenditures.

His final position at the Prosecutor’s Office was as an Executive Captain for 14 years, between August 2002 and June 2016. For 11 years, he commanded the Office’s Tactical, Administration and Trial, Family and Specialized Crimes Divisions. 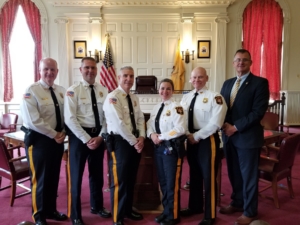 He was instrumental in seeing the Morris County Prosecutor’s Office be accredited by the New Jersey State Association of Chiefs of Police in May of 2012 and re-accredited in June of 2016.

In 2003, Undersheriff Rose was recognized for his participation in the Executive Protection and Security Detail within Morris County of then-President George W. Bush during a campaign visit to Madison Borough.

In 2006, he received the ASIS International Leadership Award in recognition of his outstanding leadership and commitment to the highest standards of the profession of law enforcement.

Undersheriff Rose has continued to pursue educational opportunities throughout his career.  He has completed course work and received certification in Supervisory Management from Rutgers University. He is also a graduate of the F.B.I.’s “Law Enforcement Executive Development Seminar” (L.E.E.D.S.) as well as the New Jersey State Association of Chiefs of Police’s “New Jersey Police Executive Institute Training Course”.

Morris County: Sheriff’s Office Detective Lieutenant Is Promoted to the...